‘HIM’ is finally here! Watch the new music video 🥳

September 1st is our Birthday 🥳 So you all need to do whatever we want 😜😜 and our biggest Birthday wish is for you all to listen to our brand-new Spotify Original Podcast that came out today (it’s right here!)❣️ We are so excited. Now excuse us… we’re busy getting drunk 🍻🍹🍸Please follow the official Instagram account for the podcast at @kaulitzhills.podcast, see you!

Starting September 1st, at the occasion of Bill and Tom’s birthday, the twins will start a new Podcast on Spotify, called ‘Kaulitz Hills, Senf aus Hollywood’. They are currently in Germany to promote it. The podcast will be in German.

With Anastasia Rastorguev from trèsCLICK Magazine

As you may know, Tokio Hotel have their own brand called ‘Magdeburg Los Angeles’ (MDLA). This week marked the 16th anniversary of their iconic song ‘Durch den Monsun’, so they decided to give their fans a cool 16% off on their merch, and up to 50% on some items! All orders will also include a free MDLA patch while stocks last. Classics are even back in stock, and Bill recently announced on Instagram that a new collection is coming up in September.

We have a new newsletter!
Sign up here if you want to be provided with news, exclusive content and tour info. #Monsoon2020🔥🌊 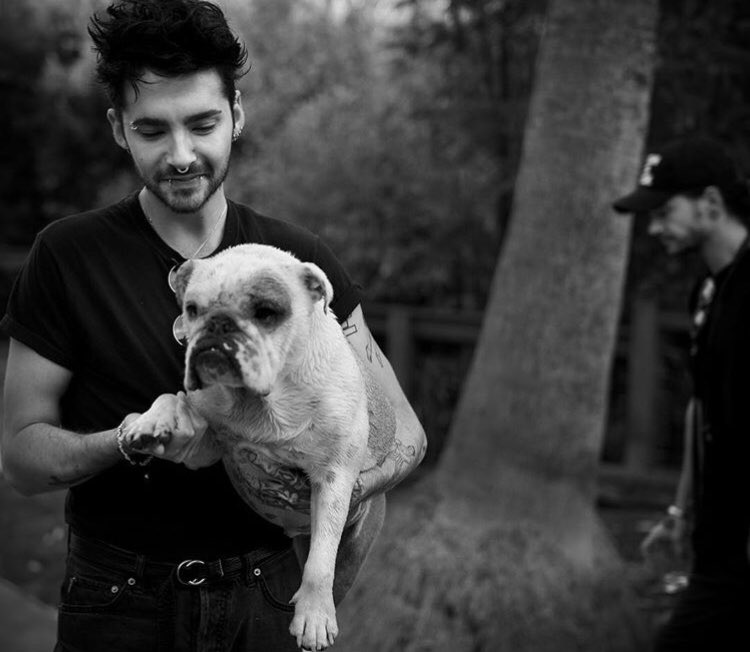 We are very sorry and heartbroken to announce to you guys that Pumba, Bill Kaulitz’s dog, died last night. To many of us, Pumba was sort of in the band. He followed the twins absolutely everywhere, including on tour. We have had the chance to meet this adorable and amazing cutie a few times, and we do know how important he was to Bill. Here’s what Bill wrote this morning on Instagram:

“dear pumbi, today life took you from me way too soon and that was the hardest and saddest thing I ever experienced. you were so strong and such a fighter because you loved life so much. our bond was so special, you were the best thing that happened to me. I will forever be grateful how much joy, love and laughter you brought into my life. you knew me so well, my best friend. my heart hurts so bad knowing i’ll never be able to see your little eyes again. rest in peace my little baby. I will love and miss you forever. more than I can ever express 🖤”

The AlienTHeam is back with a new epic remix, this time using the song ‘Cotton Candy Sky’! We absolutely love it, and it will definitely be added to our Summer playlist. Don’t forget to add it to yours as well!

Also, if you love the design as much as we do, here are some merch you can find with this fan-made ‘Cotton Candy Sky’ logo. It really is marvelous!!! Check it out ♡

“We have an authority problem”

Your breakthrough was in 2005. For five years you’ve been totally into it and gave your all but after that, you went to LA, fully exhausted. Which period fulfilled you the most?

Bill: The current period. The older you get, the more you realize the madness. It felt like a trance when we were teenagers. For me, the current period feels better. When you are younger, you take things more easily. Today, things are more difficult. Working a whole day isn’t as easy as it used to be when we were younger. After a tour, we are already ready for holidays. As a young man, you also have less fears. However, when it comes to creativity, the band is much better than it was.

How was it when you moved to Los Angeles?

Bill: We didn’t do anything for a year. At 20 years old, we simply wanted to have a normal life. We hadn’t been existing as people outside the band all those years before.

When the success came, did music labels or others affect you?

Bill: We’ve always had an authority problem. We always had to fight to take part in the decision-making process. The label didn’t like us; we were always the complicated band. Nevertheless, due to our success, it was okay. The band existed before, it was our baby. We wanted to control everything. Anyway, we had to arrange ourselves with Major-Label, etc. It was really nice with the current album; we did everything on our own. Writing, producing…

Back then, when there was the extreme fan-hype, some fans exceeded the limits. Breaking into your house was the highlight. Did you lose respect in people?

Bill: At least we had the feeling that we did not belong anywhere. You are far away from humans. I didn’t like that. I love it to be around people.

Do you learn to deal with pressure in extreme situations? Does that shape character?

Bill: We always wanted to have responsibilities. We were only 15 when we moved out of home to have our own apartment; we set up a company, and sat around with lawyers and tax consultants all the time. But the older we got, the more we wanted to let go of the backpack.

Tom: It would have been better if we had not taken so many responsibilities back then. We always took too much, also during school time.

Bill: You want to cope with success the older you get. Going on stage is not easy-going anymore, not as it was at 14. I always have to take back the easiness. That’s what we did with the new album, back in the roots of when it was only about music. That’s why we’ve produced everything on our own — without any label or management. Thankfully, we were at a point in our career where having fun mattered. We want to make things we want to do, far away from the music industry.

Was there a point where you were aware of making history — especially for people? We do connect moments and phases/stages with songs.

Tom: You realize that when people tell you their stories. Today, you realize it even more than before. We totally missed that.

Bill: You are so overwhelmed. When a fan stands in front of you and starts crying, so much energy comes together. I was exhausted after hearing those stories.

How was it when you became millionaires? Does that change character or does it only makes it stronger?

Bill: Money does things to people. I like it how money can give you something like freedom. We did not want to be dependent on someone, even not when we were younger. Our pocket money was like a budget that we managed.

Tom: Now we do whatever we want with our money.

Bill: Money must be fun. I want to experience and live. We should probably be more careful. But, for example, we invest a lot in our career. Expensive videos, expensive productions and performances. Most of our money is spent on Tokio Hotel.

You never wanted to follow the rules. Is that kinda part of the success, breaking the rules?

Tom: You get the best ideas in emergency situations. For example, if you don’t like what producers make with your music, it’s probably better when you do it on your own. If you are unhappy with a situation, you get good solutions from it.

Bill: I can’t imagine a life without breaking the rules.

Bill, as a lead singer, did you have role models?

Bill: My stepfather showed me the movie Labyrinth with David Bowie. That man really inspired me. I even had the same hair. I also listened to Nena. But I never had that kind of role model whose poster was on my wall. But of course, several artists inspired me.

Is there someone you want to meet/get to know?

Bill: Unfortunately, they are all dead. Bowie, Prince… They were extraordinary. I’d like to meet Depeche Mode; they are really cool.

The new album “Dream Machine” is more electro. Did you change or did the fans want something new?

Tom: If you ask the fans, they would have been happy if we had done the same thing Avril Lavigne has been doing for like 40 years now; the same music. That would have also been the easy way. Finacially, it would have been interesting as well. But we have never made decisions according to money. We just changed as humans.

Bill: I could show you so many emails in which people write that we are committing career-suicid. But we don’t want to do it like Avril Lavigne or Pink, who are still doing the same music as they used to make in the beginning.

Tom: We don’t have a dividing line between business and life. We are our music. We don’t go “to work”. It’s all the same. Our music reflects.

You once mentioned that you want to open a nightclub. Why?

Bill: Because we like to party. I always felt attracted to nightlife. Also people’s abysses. I have always wanted to play a junkie in a movie. I like to watch live how people fall out of their roles. Everyday life sucks. I want to experiment. When we go out at night, we bring about twenty people together, who don’t know each other. That’s why we want to open a nightclub. Preferably in LA. There, they don’t have the nightlife we have here (in Berlin).