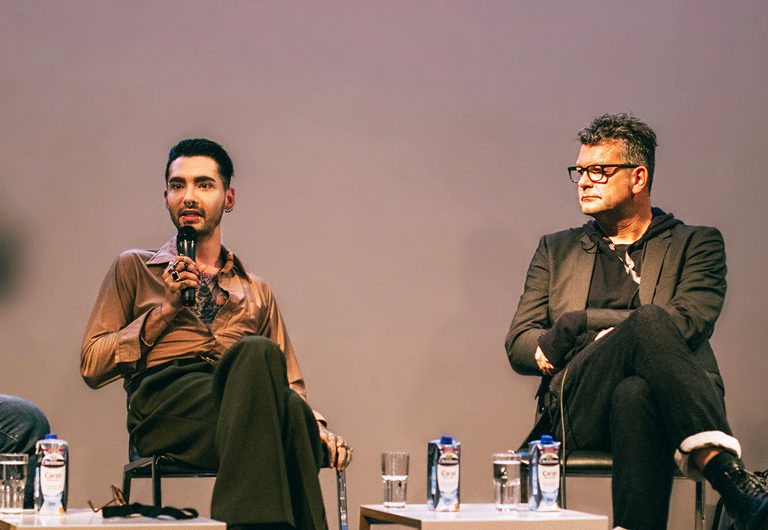 “ich muss durch den monsun, hinter die welt” these are the lines that made Bill Kaulitz and his band Tokio Hotel famous in 2005. At the same time producer Oliver Schwabe started to recognize Tokio Hotel and was fascinated by them: ‚what I really found interesting was that Bill combined all codes from subcultures, while he as person took place in mainstream media.‘

Guided by this fascination Oliver Schwabe tried to get in contact with the band. But he failed due to the success and high demand for Tokio Hotel: “I was working on a movie at this time and I tried to reach out to you [Bill]. But I wasn’t able to get in contact.”

Today, 12 years later, Oliver Schwabe and Tokio Hotel made the documentary Hinter die Welt (engl. title: beyond the world), which premiered at the Filmfestival Cologne. In the context of the lecture Beuys will be Beuys Bill Kaulitz and Oliver Schwabe talked about how they build mutual trust, about the developing process and how they used the movie to portrait the band.

Oliver Schwabe filmed Tokio Hotel during the past two years on their world tours, in the studio and in their very own environment. When they started talking about working together, Bill invited Oliver: “we had skype-sessions and then Bill suddenly told me: ‘stop talking. Just come over. Then you’ll see what’s possible’. Then I flew directly to Mexico. I arrived at night and I went back to the airport, at 6am in the morning, to see the band arriving.”
The teaser of Hinter die Welt shows what Oliver Schwabe experienced in this moment:

Bill Kaulitz: “It always felt like we’re in this together.”

For Tokio Hotel it was really clear early on that they wanted to do the documentary: “we knew that working with Oliver would be a team work. It always felt like we’re in this together. We wanted to do the movie because there are some misunderstandings. People kept talking about things. This was our chance to tell our own story and make things clear.”

Oliver Schwabe was aware that it’s not always easy to let a stranger into your own world, since he already dived into a lot of different world for other documentaries he produced. That’s why he offered Tokio Hotel to let them do the final inspection of the movie, with this agreement Oliver was able to build trust, while the team of Schwabe was critical about it: “my colleagues told me ‘are you nuts?’ when they heard about my agreement with the band.”

Another challenge Schwabe had to deal with was diving into the Tokio Hotel world while he accompanied the band at their feel it all tour in Russia in 2015. Not only to walk into their world, but to deeply dive into it and become a part of the world itself. Schwabe revealed that he not only met Tokio Hotel, when he started to film, he met a whole family instead. A family which was built over years to have the strength to master the past and very difficult situations. This is how he dealt with it: ‚when you meet them, you just burst into a family. It then takes a while, until you’re allowed to say something there. But I just waited. I waited until my time came.”

After Schwabe became a part of the Tokio Hotel world, he continued to accompany the band to their Dream Machine tour in Cologne, Paris and Russia. In Russia Schwabe was especially inspired by the contrast between the country and the band: “that’s why I wanted to go to Russia again. It made a lot of sense to me to film there. For example in Novosibirsk where everything seems to be grey and where it’s stilll snowing even though it’s almost May. And then they come into the venue and it’s like Peter Pan, like in a fairytale. You can see it in their [fans] eyes! It’s a promise of a different world and this makes so much sense to me.”

Schwabe portraits not only the contrast of the different environments around the band, which are taking place in Magdeburg and Los Angeles. He also manages to show the opposition of the environment of the fans and how this suddenly changes when they see and meet Tokio Hotel. He produced a documentary in which he highlights not only the world beyond Tokio Hotel, but also different aspects, backgrounds and environments, by using impressive pictures of the different worlds. But the movie doesn’t only look at the band itself. He also takes a look at the band members. Gustav and Georg, which usually like to be in the background, talked about how they felt when Bill and Tom left Germany and what they thought about the mandatory break. Besides this Gustav and Georg visited Tokio-Hotel-wise historical places in their hometown Magdeburg, like the Gröninger Bad or their first rehearsal space. This way Schwabe succeeded to show one more world: the history of Tokio Hotel, which completes itself through memories and narrations of Gustav and Georg.