Bill really likes science fiction movies such as Passengers and Arrival. He’d like to shoot some one day.

The twins don’t have any personal early childhood memories because they were always together, shared every thing and talked about every thing.

They were asked about russian singers. Georg named T.A.T.U. and Bill started singing ‘All about us’ and said he likes the song.

If they were teachers, Bill would teach German or art. Georg would be a physed teacher. 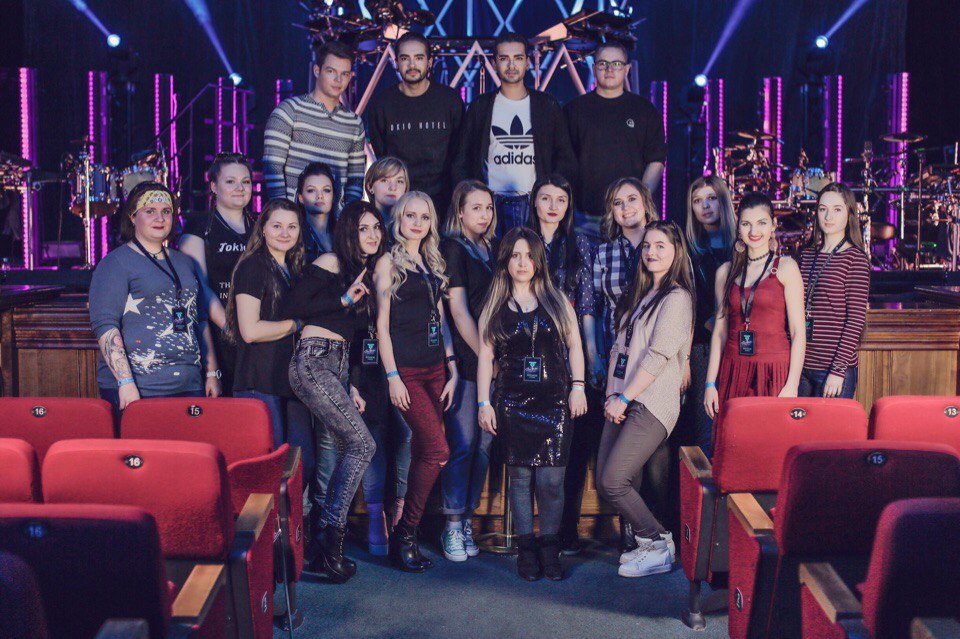 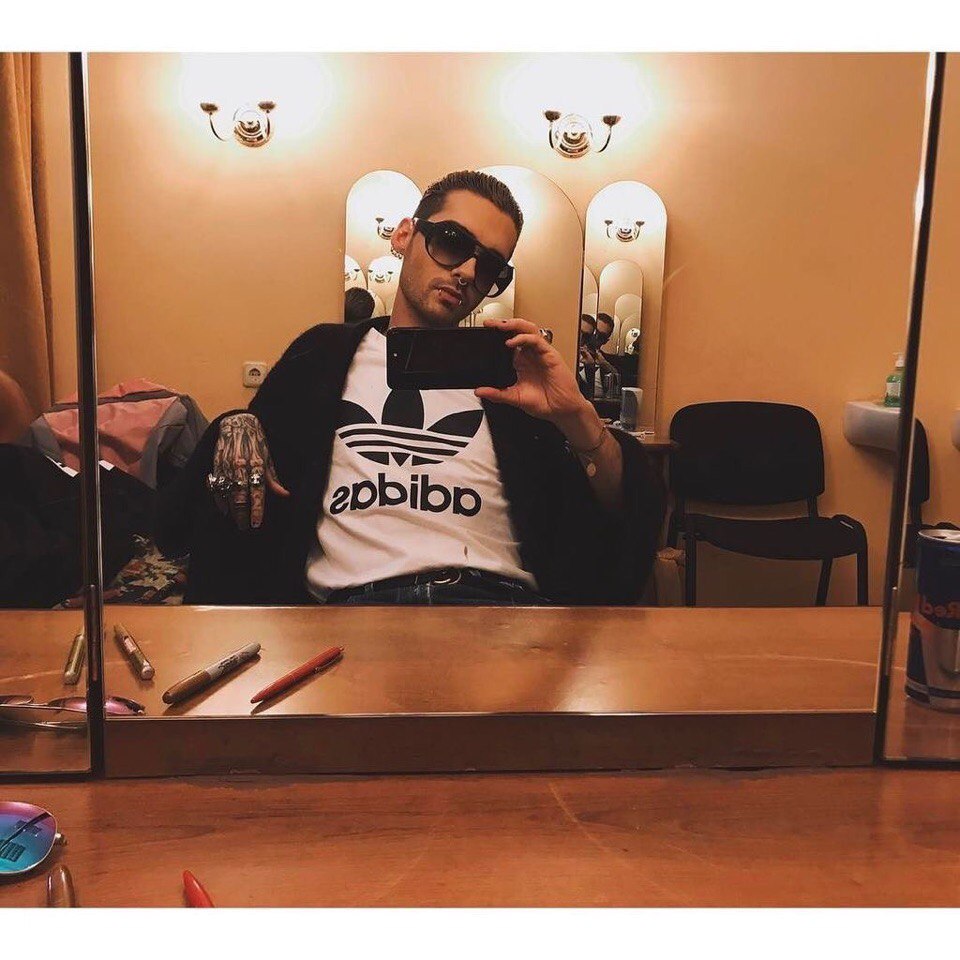 They were asked about men they like. Bill said David Bowie, Tom said Vin Diesel for Gustav and they all started laughing.

Bill and Tom had a bunk bed when they were little, and Bill often slept in a tent.

Bill and Tom were asked if there was confusion sometimes when they introduce their lover to their family. Bill and Tom looked at each other and laughed. Bill said it happened to Tom recently. Bill added that he never introduced his lover to his mother because of language barriers (his mother doesn’t speak English).

Bill and Tom don’t give each other birthday gifts.

They said they don’t understand live streams on Instagram.

Bill’s new phone case was a gift from a fan in the KOS Vip in Ekaterinburg.

Bill only buys faux fur, and the tour costumes are synthetic.

Bill would be happy to meet a girl like his mother, because his mother is wonderful.

Bill and Tom do not know about their father’s blood line.

None of them know their blood type.

Gustav doesn’t mind if his daughter will decide to play in a band or not, as long as she studies well.

They won’t perform in Eurovision, because they are famous and they don’t think it’s fair. They also think that the Eurovision contest became too political.

Bill said he can’t stand cheap people who feel jealous every time and can’t share anything or give anything to other people.

If Bill liked someone who has a child, the baby would not prevent him from dating that person.

When the twins are angry, they go to a corner and smile for 60 seconds. Bill also said that Tom can’t calm him down because they share every thing.. So when one is angry, the other is too. It has to be other people who cool them off, e.g. their best friend.

A drawing of Pumba in the Deluxe edition of ‘Dream Machine’ was drawn by Bill and Tom’s mother. It was a Birthday card at first.

A girl offered Tom to shoot masterclass of sound producing on YouTuve, and he said he will think of it and ‘soon’ post on his Instagram.

One of Gustav’s best day of his life was his wedding.

Georg doesn’t have enough nerve to go sky diving, bungee jumping or fly in a hot air balloon. He finds it all dangerous.

When Tom wants to know someone better, he asks the person about his or her favourite music and whether or not he or she likes dogs.

Bill is allergic to apples, nuts and avocado.

They’d fight on the ring with Kanye West and Kim Kardashian.

Georg said that the best day in his life was when he met Bill, Tom and Gustav.

They were asked what they would change in their life at the moment. Bill said that he would sleep more.

They would tell their 2005′ selves: ‘Never look back and be able to say ‘no’ sometimes’.

They said Natalie Franz discovered the magicstripes while working with Tokio Hotel. Bill said Natalie had always had the drive to do something such as magicstripes, as she’s really focus on her business. He supports her.

In Russia be a Russian!
Cute video from vip KOS in #DMKazan
by https://t.co/xaNxNsfC4V pic.twitter.com/RrN5YBenvG 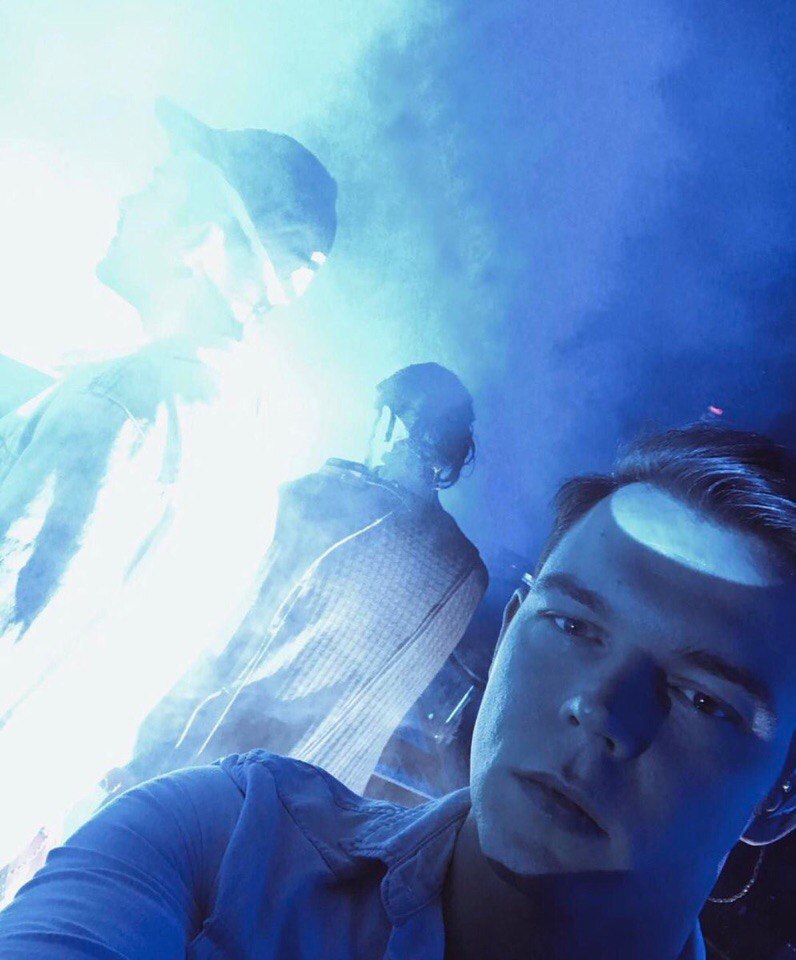 The twins have one rule: every Sunday, they watch movies. At least one.

Bill said it’s really important to not change for someone else, that one has to remain oneself in a relationship.

If they could time travel, Bill and Tom would go to the future to explore other planets.

Bill said that one of his best experience ever was when he jumped out of a place in Hamburg with a parachute. He said it was amazing.

Tom wrote ‘Something New’ like a movie score and kept it just like a soundtrack for a very long time. But many people kept telling them that it was great and that they should work on it, so they did. That’s how the song was born. Moreover, Bill wanted to create a song with a very high pitched vocal, so that’s what he did as well.

One question was about musical production, and Tom said that he’s still learning and that the most important things are bass line and drums. Vocals are the last thing to edit usually. 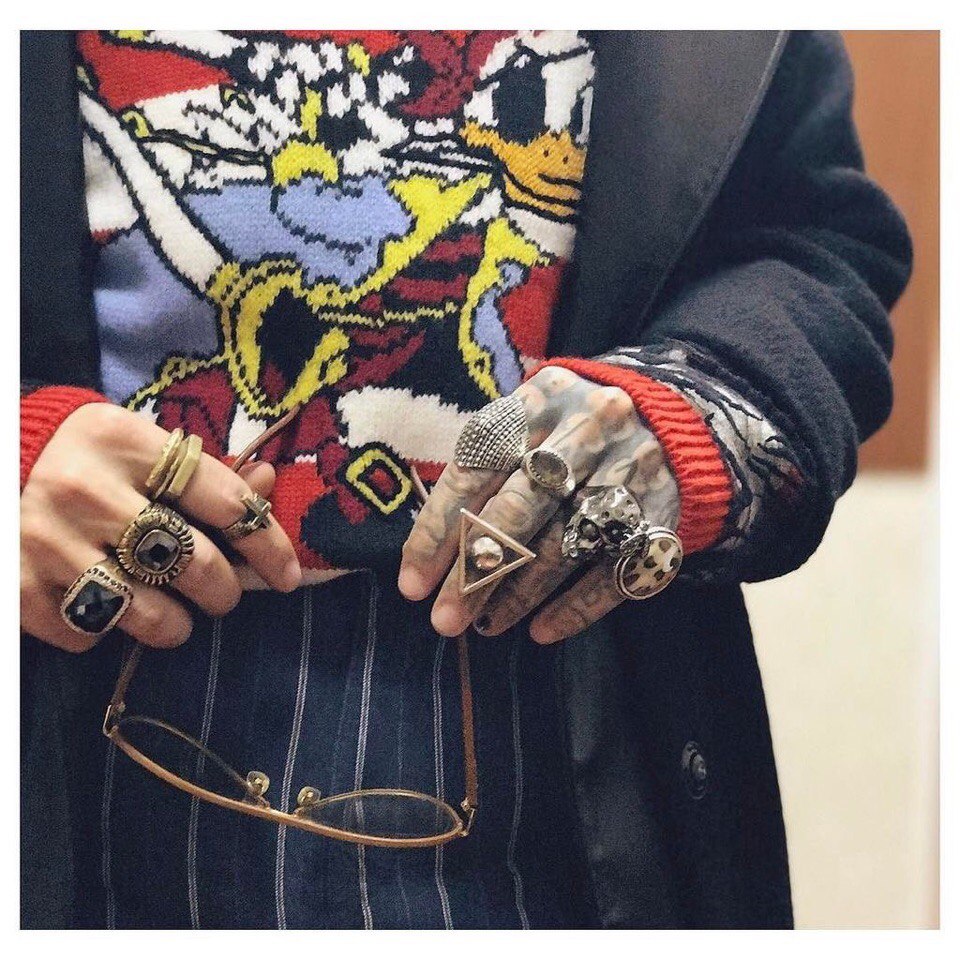 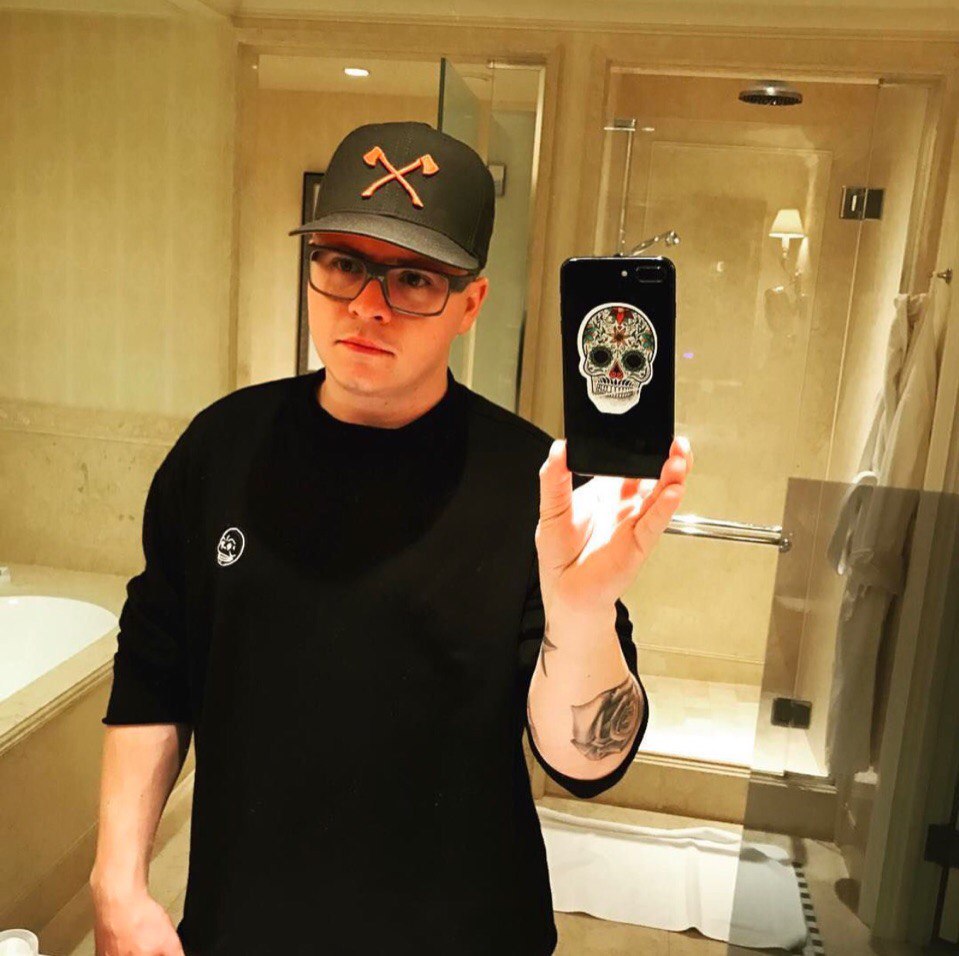 The twins miss LA a lot, but they’ll be staying in Germany for a while after the tour to shoot two music video and for some promo.

Bill’s emotion on the cover of the album is surprise and astonishment he might feel if he saw aliens one day.

They were asked how they recover from a concert night. Bill said: make up and drink a lot of water.

Bill said he likes the book ‘Harry Potter and the philosopher stone’ because Harry learns everything for the first time, everything is new and unexplored and it’s magical. Georg said he likes Dobby, and Tom likes Severus Snape. Bill likes Voldemort.

Talking about working process of planning a new music video, Bill said that the first thing he does is finding a direction with similar views as his. Then he calls every ‘candidate’ via Skype and discusses details and concepts for the future video.

Bill said he doesn’t read a lot, but sometimes he reads motivation books.

Bill tries to surround himself with people eager to try new things and to always do something. It motivates him better than books. They haven’t read russian books either, but they’ve heard stories when they were younger, such as Baba Yaga (though it’s more Slavic folklore).

Bill and Georg’s comfort zone is Christmas time, Tom’s is being with friends and Gustav’s is coming home from tour.

They’ll maybe do a cover one day, but not now.

‘In die Nacht’ was created in Spain. They wrote the music before the lyrics.

They prefer travelling by bus than planes, as it gives them more time to sleep.

In ‘Games of Thrones’, Bill would kill Jon Snow and marry Cersei. Tom would have sex with Melisandre.

Bill was asked about group sex, and he said that they didn’t do that with the ex, and never had that kind of sex.

The most sexual smell is your own, unique, natural. Bill wouldn’t deal with bad smelling people.

Sometimes Bill reads comments on his Instagram, and even Direct Messages, though one can’t see if he has read his or her or not due to his settings. 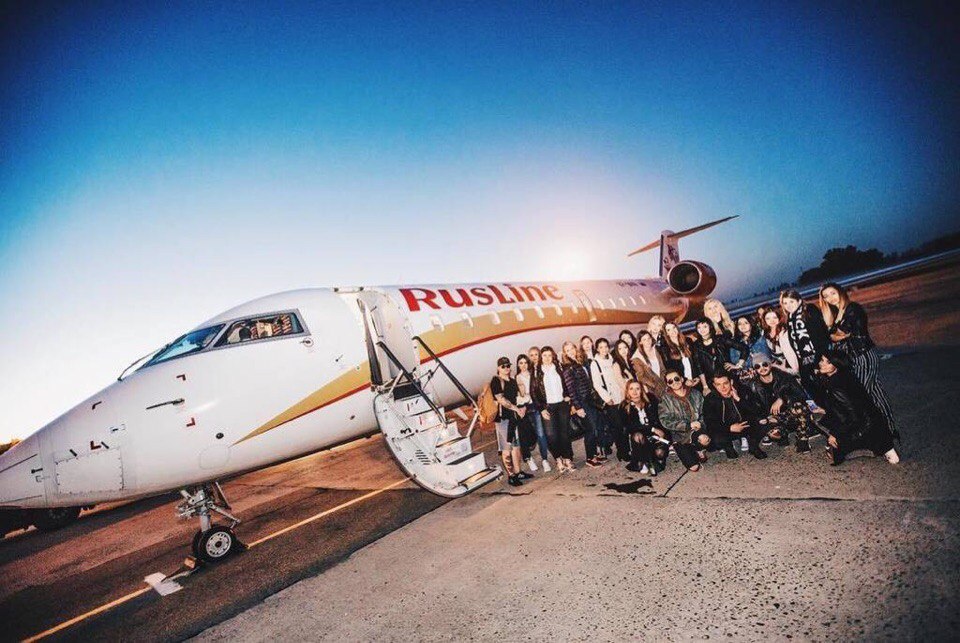 A guy asked Bill why he stopped talking so much on stage. He used to talk often about his parents and their divorce. Tom said that it was a good question. Bill explained that he was only 15-16 and he was very nervous about every show and that those speeches helped him calming down. And now he understands that people go to their shows to listen to their music and not his speeches. And when he goes to shows himself, he hates these speeches, because he goes for music, not for listening to people talking. But he said he’ll try to find a middle way.

A girl asked them what was the funniest accident of ther childhood. Tom said he doesn’t see any ‘fun’ in accidents. But the twins remembered something; when they were kids, they went sledging and Bill pushed Tom, so they fell down, and a girl, who was right after them, cut Tom’s brow. They started arguing whose fault it was. Tom said it was Bill’s, and Bill accused the girl.

They think Marylin Manson a cool and unique artist.

Sometimes, Bill would like to have long hair again when he’s on stage.

A girl asked Bill why he doesn’t like Trump. She offered him two options: a) because he is in sympathy with other celebrities on hating Trump, or b) because he thinks Trump is a bad politician. Bill chose the second option and said he always has his own opinion on every ussie. He just doesn’t like Trump’s politics.

Someone asked ‘what if extraterrestrial beings are pure monsters like creatures in movies’. Bill said society makes us being afraid of them on purpose. He believes that if one day they come to Earth, we should be welcoming and hospitable to them. People should also invite them to live here ‘because our planet is beautiful”.

If Bill and Tom were not twins and met for the first time as adults, they believe that they would definitely become best friends, as they are so much alike and would feel like being soulmates. Georg joked that they would date, then.

Bill said that he once heard a tap on his hotel door during the tour. He thought that it was his meal order, but when he opened the door, it was a fan. She said ‘May I talk to you? For five minutes, not more!’. He was surprised and kind of confused and replied: ‘No. You shouldn’t come here and interfere into my personal space’. She began crying and he asked her to go and after she fell down on the floor and continued crying. Bill said it was a real hysteria.

Someone asked them to choose between not feeling the taste of food and orgasm. They chose not to feel orgasm because it doesn’t last long.

They said they miss kindergarten. Bill especially misses the innocence and pureness.

Bill said they got so many sexual questions and feels like all Russians do is have sex.

Bill said that the best feeling is experiencing things for the first time. He’d like to experience certain things again.

Georg said he once passed out during a flight from Amsterdam, on his way to the bathroom.

They couldn’t travel by tour bus because of bad road conditions in Russia. 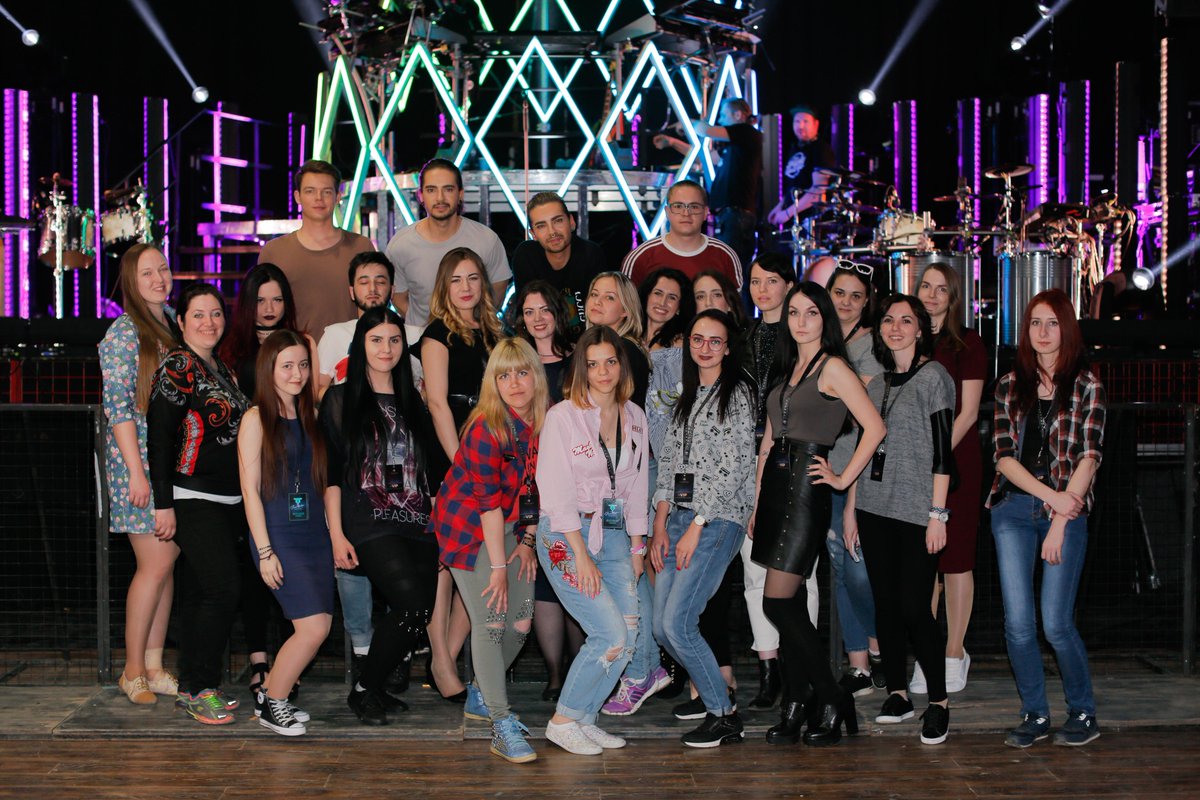