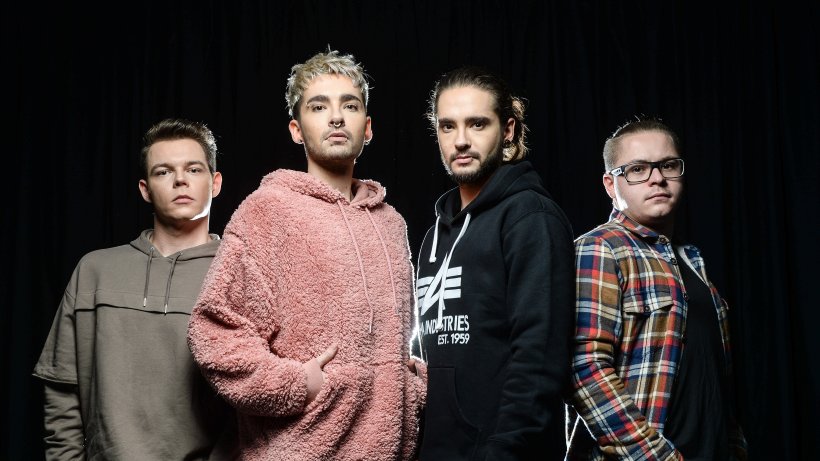 Your last album was a moderate success. Does that put you under pressure?

Bill: When you make your first album, you’re totally innocent. No one has any expectations, there’s no pressure. We wanted to go back to this while writing songs this time bcause you get a much different access to your own creativity. We are lucky to still have a very strong fanbase. That’s why we had a great tour in 2016. We can relax thanks to that.
Tom: And we will always keep on making albums. No matter if there’s one that isn’t selling well. That’s always a point of view, anyway. The last album went gold and #1 on iTunes almost everwhere. And besides albums, we always make music. An album is just a summary of this time. There’s no alternative for us. We can’t do anything else.

Bill: For us, it was never about becoming famour. When we aren’t promoting our album, you won’t see us in talk shows or on red carpets. We do the whole rigmarole when we promote an album but to us, it’s only about performing and making music. I thought it was difficult when it started, as it was more about our person than about our music. Especially in Germany; it was extreme. That’s why we moved to LA and did nothing for four years. That was our only solution, for personal and professional reasons. For a while, we had only been on the road and totally isolated from normal life and normal people.
Georg: We were stuck in the same buble, but it was still a bit more calm for me and Gustav. We didn’t have to flee to another country.

Gustav, you became a father last year. Aren’t you questioning the band life? Do you even want to go back into this bubble?

Gustav: You definitely become ore relaxed. I don’t overthink anymore and I limited my alcohol consumption a bit (laughs).
Bill: I think the balance got mor important for us all now that we are older. Back then, we would come back from school and make music. There wasn’t anything else. We had no social life outside of the band. Nowadays, it’s different. Gustav is a dad and he is married, Georg has a life with his girlfriend. Everyone is doing their own thing. Now, we like to jump into this bubble and go on tour, because we know that we can get out of it again.

Friendships change when people become parents. What has it done to the zip in your band?

Tom: That’s true, but I think it’s more extreme with women. I also had this fear, but everything remained the same way as it was before. When you’re a girl group and two of them have a child, then there’s no Sex and the City anymore. Then it’s more ‘sitting at home and taking care of a baby’. But with us it’s still Sex and the City.

How about the others? What do you think about family planning?

Tom: Bill and I don’t have a life plan like this.
Bill: Sometimes I feel like I’m 100 years old. Then I think that I’ve already experienced and seen it all. Then I wish that there was an experience that would shake and change everything. And sometimes I feel like 12 and imagination strucks me. Then I think stuff like ‘I can’t marry yet and have kids’. But I have never experienced a relationship such as the one Gustav has right now. That changes everything, of course. Maybe my life is simply destined for something else.

You’ve been rehearsing since Cecember in Berlin. What connects you to this city?

Bill: Berlin is the german equivalent of LA. It’s incredibly international. People from all over the world come to Berlin because there’s such a freedom. The nightlife is great, I love the Berghain. It’s the best nightlife in the world, to me.

Can you move more freely in Berlin than elsewhere in Germany?

Bill: Yes, that’s where we are the more relaxed. I’d never walk down the streets in Magdeburg, but in Berlin, I can.

Did you ever think about moving to Berlin?

Bill: I don’t think that we would settle permanently in Berlin.. But Tom and I often thought about getting a second home here. The city inspires us a lot, that’s why we like to spend our time here.

How is it to spend such a long time in Germany again?

Tom: That’s like our whole career. We enjoy it much better, because we can go out again. When we still lived here, it was like a prison. I didn’t like anything about here. Now I love to come back.
Bill: Now, we can miss Germany again. It’s always a bit like a vacation. But when we say we fly back home, we do mean Los Angeles.

And you two live together?

Bill: Yes. We have always did. It’s a real ‘men household’. But Tom is very neat.
Tom: That’s because we’re almost never home. We eat at the restaurant three times a day. Our fridge is empty; there’s only alcohol in it. We don’t even need to use the dishwasher.

In a couple of years, you’ll turn 30. Any thoughts about that?

And what do you want to accomplish until then? Build a house, plant a tree, father a son?

Bill: I really want to marry. Someday. And I want to own my own club, the best one in Europe. And my own fashion line.