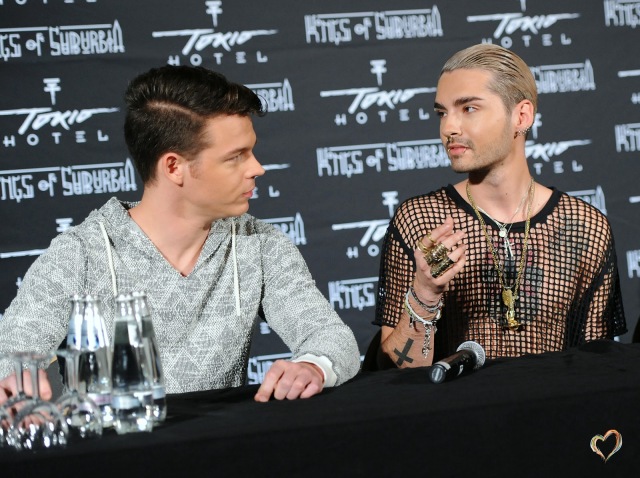 After five long years, German rock band Tokio Hotel is back with their new album “Kings of Suburbia”!

During a MYXclusive phone interview with guitarist Tom Kaulitz and lead vocalist Bill Kaulitz, we had the opportunity to ask the band some details about their comeback album “Kings of Suburbia”!

“We worked on this for a long time actually,” shared Tom. “We took some time off after the last record and we just need to live life and I think that’s what this new album’s all about. We put a lot of life and a lot of love into this record,” he continued.

As for the title of the album, Tom revealed that “Kings of Suburbia” is about a feeling that they had when they were still kids, growing up in their hometown. “It’s a feeling that everybody of us always had. It’s a special meaning for us.”

Prior to our phone interview with the band, we asked some Tokio Hotel fans to send us some questions that they want to ask Bill and Tom and the twins were nothing but excited to answer them!

Q: Why did you decide to change your music style for this album, Kings of Suburbia?
TOM: “We didn’t really just sat down and discussed this change. We just started to make music and we just wanted to see what comes out of us. It was really natural. The working flow was really different for this album. It was a supernatural process.”

Q: What is Tom’s favorite tattoo of Bill? 🙂
TOM: “I think the hand tattoo is pretty amazing and it took a lot of pain and a lot of work so that’s one of my favorites.”

Q: I wonder if Bill’s mom approved Love Who Loves You Back video!
BILL: “My mom actually loves it! She loves all of it. My mom is probably the biggest fan of Tokio Hotel! She’s been always super supportive. She loved the video, she loved the message. She’s a fan of it!”

And for the most common question from the fans: “Are there any plans of visiting the Philippines soon?”

“We’re just planning our tour and we’re just thinking about where and when we’ll play. We hope that next year, we’ll get to travel all over the world. We would love to play in the Philippines! We’d love to see our fans and play there so yeah, this might gonna happen in 2015!”

Aside from answering the questions that you sent them, Bill and Tom also left a message for all the Tokio Hotel fans out there!

“We just want to say thank you so much to everyone! We see the comments and we feel the support and we can see the love. It’s so great and we’re so grateful for everything they do and it’s amazing! We hope to see everyone soon!”

We know you’re all excited for a possible visit from Tokio Hotel next year and that’s really something to look forward to!