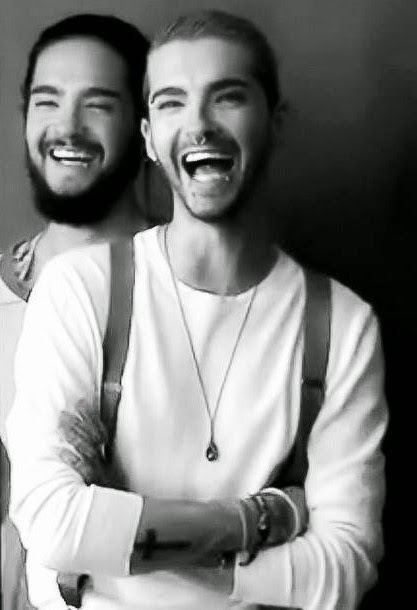 Berlin – It’s been quiet around Tokio Hotel for a long time. Bill and Tom Kaulitz (25) basically moved to California over night. There they worked on their fourth studio album “Kings of Suburbia”, which combines electro-beats with instruments and turns it into club music. An interview.

Why did you move to Los Angeles?

Bill Kaulitz: Because we reached a point where we felt overwhelmed. We had to get some distance between us and the whole Tokio-Hotel-Hype, to find out what we really want out of our life. Our career had to wait to make it possible for us to clear our head of everything.

you really find the anonymity in California that you longed for?

Bill Kaulitz: Yes. In the beginning we didn’t even really move into Los Angeles, but lived out of the city. It gave us the chance to completely disappear – but we also didn’t really go out in the beginning and therefore spent most of our time at home.

Tom Kaulitz: People stare at us here much less than they do in Germany. But being spotted isn’t really the problem.

Bill Kaulitz: Exactly. What’s really bad is when people stand in our gateway or follow you with their car – to some extent it almost bordered on being unhealthy. In the US we just don’t get confronted with such things anymore.

Then there is no danger of you ending up like Britney Spears?

Bill Kaulitz: Every human being goes through a rough patch once in a while – you can’t avoid it. You start to question your life or your career. You simply have to try and keep it out of the public eye, or the media is going to blow it out of proportion. It wasn’t like we didn’t have a reason to disappear out of the public eye. When this promotion and release cycle starts again, it could definitely happen that in one and a half years I’ll just go: “I can’t take this anymore. I need a break.”

Theoretically you could just break-up (the Band). Or aren’t you made for a “normal life”?

Bill Kaulitz: I can’t live well with, but also not without the fame. On the one hand, I love being on stage and making music. On the other hand, I struggle with not having a private life. So, there are moments where I curse our success. But Tokio Hotel is the love of my life.

Do you ever want to trade places with your drummer Gustav Schäfer and your bassist Georg Listing, who aren’t in the public eye as much as you?

Bill Kaulitz: Of course they do have it easier in some aspects, than we do. They still live in their hometown. The loss of their privacy was never such a big topic for them as it was for us. They’re really glad about that. They probably really don’t want to trade places with us.

Do you really never get jealous of them?

Tom Kaulitz: Everyone plays their part in the bad, that’s just how it developed. We don’t fight about things like that. There was never any jealousy or envy.

Bill Kaulitz: Sometimes our fights get really intense. When that happens, it gets so bad that all others just leave the room.

Tom Kaulitz: But after two hours everything is okay again.

Bill Kaulitz: Because we really can’t imagine a life without each other. We’re basically one person. When we’re separated, something is missing.

But you do not want to live together, forever, right?

Bill Kaulitz: I think we will always live together in some way. Maybe we will live in two houses that are next to each other at some point, connected by a tunnel.

Tom Kaulitz: And Despite not having been on stage in the past five years, we still spent every single day together.

How does your everyday life in Los Angeles look like?

Bill Kaulitz: Tom is a little calmer than me. I like going out a lot. Actually I’m only partying.

Tom Kaulitz: We have a strange rhythm. We go to bed at around 6 or 7 in the morning. We see the sunrise every day.